Hillary Clinton headlined an all-day conference, In Defense of Democracy, co-organized by the Albert Shanker Institute, the American Federation of Teachers and Onward Together, Sept. 17 at George Washington University in Washington, D.C. Her strong warning that democracy is under threat reverberated through her keynote speech as well as panel discussions and presentations with prominent activists, politicians and intellectuals.

“The norms and institutions that provide the foundation of our democracy are under assault, and that includes the single most important fight of our times, the fight that makes it possible to wage every other fight and must be the North Star that Frederick Douglass pointed toward—the fight to protect the right to vote,” said Clinton. She called the attack on voting rights “a deliberate and ongoing effort to undermine the integrity of our elections and silence the voices of millions of Americans, particularly the elderly, women and people of color.”

Clinton and others described prohibitively long lines and limited hours at polling places where young people and people of color vote; malfunctioning equipment in those same communities; and voter ID requirements that disproportionately cut off voting for low-income people, people with disabilities, racial and ethnic minorities, and the elderly.

Clinton has sounded the alarm on these and other attacks against democracy—including foreign interference in our elections process—since her campaign for president, but people were not ready to hear her message then, said AFT President Randi Weingarten, noting the long-range nature of the threat. “Democracies don’t die in a coup overnight,” said Weingarten. “The process is more gradual, at the hand of elected leaders. They chip away and weaken democratic institutions. Autocrats ally with establishment politicians, and through corruption and power they undermine democratic norms.”

The result is elections in which candidates can do all the right things, including win the popular vote, and still lose the election, said Clinton, who cited four primary threats to fair voting: voter suppression, hacking information from candidates’ emails and accounts, false news stories, and ballots vulnerable to electronic tampering. She also named Donald Trump as a primary culprit in election meddling, citing his recently ramped up “propaganda efforts” and “fake endorsements and outright lies” on Facebook.

Other participants in the day’s panels discussed the role resistance can play: Leah Greenberg, co-executive director of Indivisible, described how sustained activism has lasted past the initial outrage following Trump’s election, focusing on voting rights among other issues. And Amanda Terkel, Washington bureau chief for the Huffington Post, lauded the enthusiasm among reporters eager to enter the conversation despite the demonizing of journalists, bans on outlets that criticize Trump, and a wave of layoffs in the industry.

Gara LaMarche, president of Democracy Alliance, warned listeners that Democrats need to pay more attention to building power, as Trump and his ilk deliberately dismantle democracy to gain power for themselves. “We have been more about issues we care about, but … if we don’t pay attention to the power and the structures [of democracy] we are going to keep getting shut out,” he said. “It’s coming to be understood among a wide range of organizations and movements that democracy is everybody’s issue.”

The student activists from Parkland, Fla., leading the fight against gun violence are one example of how to reclaim that power, said Joy Reid, of MSNBC. “They’re intersectional, they’re smart, but the most important thing is that they are not afraid.” They illustrate the point that democracy does not just happen at the ballot box. “This is the most vibrant time for social movements in my lifetime,” said LaMarche, with groups like Occupy, Black Lives Matter, #MeToo, Dreamers and Red for Ed.

Sen. Ron Wyden (D-Ore.) linked the threat to democracy with election security. At a recent DEF CON hacker’s convention, where computer hackers test system security, Wyden saw that our voting system is so weak that teenagers can easily break into it. He compared current election security to “protecting our nuclear codes with a child’s safety lock,” with remote access software, now commonly installed on voting machines, that is “the equivalent of picking up your ballot boxes and putting them in the Kremlin.” In addition, says Wyden, “Voting rights have become a crazy quilt of restrictions and a hodgepodge of bizarre rules that make it more costly for states and individuals to exercise freely the right to vote.”

Wyden is fighting back in Oregon, where automatic voter registration and mail-in paper ballots have resulted in easier and more secure access to the polls. He has proposed adopting that system nationally, and urged people to contact their elected officials to help him pass a bill that would make mail-in ballots the new standard.

The Voting Rights Act—legislation designed to guarantee equal access to voting—is also crucial to the inclusion of all voters, panelists agreed, and the 2013 Supreme Court decision https://www.brennancenter.org/issues/the-voting-rights-act to limit some of its tenets has been a blow to a fair election process. The decision allowed states to impose “unnecessary and discriminatory voting laws,” said former Attorney General Eric Holder, letting poll closures, voter purging and voter ID laws take hold. Partisan gerrymandering and racial gerrymandering—that is, the alteration of election districts so that they exclude particular groups of people—have only made matters worse.

Latino voters have experienced much of this discrimination, said Maria Teresa Kumar, president and CEO of Voto Latino and an MSNBC commentator. “In 2020 the Latino vote is going to be the second-largest vote,” she said, adding that her children, ages 7 and 5, are part of that demographic shift. “Our future is here. We better fight like hell for that.”

Andrew Gillum, who lost the Florida governor race in what many view as an unfair election, has seen this discrimination firsthand. In his state, Republicans have “criminalized voter registration,” he said, requiring anyone who registers voters—including church people distributing voter registration forms in the pews and League of Women Voters volunteers passing out forms in under-represented neighborhoods—to be registered with the state. He also described voter ID laws that accept a hunter’s license as a valid ID, but not a student ID.

“We keep waiting for the big shoe to drop, but that’s not how it works,” says Gillum. “They chip away at it one vote at a time. You don’t have to steal everybody’s vote to influence the outcome of the election. You just have to steal enough.”

“Dr. King said the arc of the moral universe is long, but it bends toward justice,” said Holder. “[But] the arc doesn’t bend by itself. We are the ones responsible for pulling that arc toward justice.”

In Defense of American Democracy

Former US Secretary of State, Hillary Clinton - In Defense of American Democracy 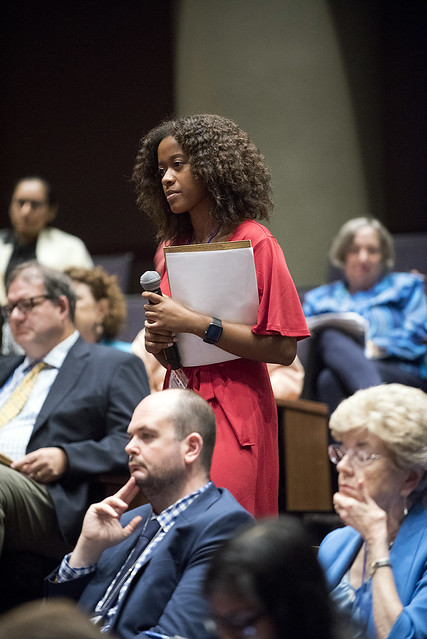